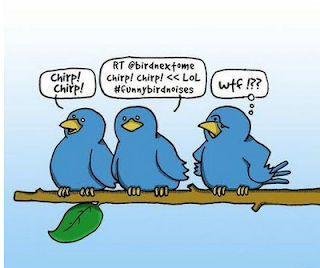 Twitter makes up the majority of my ongoing PD.  My only regret with Twitter is that I didn't join in sooner!  Having been actively involved for just over a couple of months, the ideas, conversations and doors that have been opened have been massive.  I have had a Twitter account for a while now, but did not actively engage with it - I was a Twitter bystander only following a few celebrities (using it like a gossip magazine).  I only checked it every couple of weeks and certainly did not involve myself in any discussions.  Then I read a couple of  articles about using Twitter in education...my eyes were opened!

What Twitter has offered me:
- Lastest teaching innovations
- Current teaching ideas
- What is working in other teachers classrooms (on a global scale)
- Hundred's of resources for classrooms
- Ideas on using technology in the classroom
- Global contacts

My classroom has also benefited from my connections on Twitter:
Direct Classroom Benefits:
- Students have joined the Writers Club
- Trialled 'flipped classroom' type instruction (very positive feedback from students)
- Students involved in the Pass-it-on Blog
- More people viewing our class wiki, resulting in a wider audience for my students work
- Global Read Aloud (due to start October 2012), where students will be involved in a global project

I have also been involved in the following:
My Own PD
- Webinars (Flip your classroom: reach every class everyday and Wikispaces Boot Camp)
- EduCamp Akld - this is to be held next weekend which I found out about from Twitter
- Involved in various 'chats', especially through the #edchat hastag

I am no longer a 'Twitter bystander'.  Twitter does involve a certain amount of interaction on my part, so I check in at least once a day, standing in a que...waiting for the pot to boil...anxiously awaiting the staff meeting to begin...these are all moments where I catch-up on the lastest.

The more you give, the more you get...sums up the involvement required.  Buffer allows me to send out Tweets at different times so I am not sending 10 tweets in a short space of time.  Social Bro also lets me explore my Twitter community and can analyse my users and tell me the best time to tweet.  Pair this with Buffer and tweeting is a lot less time consuming.

Posted by amymccauley at 9:00 AM