After spending a few hours writing this blog post, publishing then accidentally deleting - here is my second attempt!

This year, our school's main focus is digital learning.

Term One
We formed a group of teachers, covering all year levels within the school.  This group was self-selected, with a common goal to help the school move forward with our e-learning.  We had several meetings and the school employed David Kinane, a highly motivated and passionate e-learning facilitator.  During the first term, David came into our classrooms working along side us and showing us various tools to use with our students.  I made an wiki to begin posting our progress, including meeting minutes, help pages, staff development pages.  I intended this wiki to be accessed by all staff, so I also included a Glossary as I knew many staff did not know the terms we were using.

Term Two
We really needed an action plan to help guide our way through this journey.  This was developed with a smaller team.  We spent a day looking at the different strands of e-learning and came up with a 3 year plan.  We also looked at getting iPads in the school.

iPad Roll Out
The easy part was deciding on the device, the hard part was the roll-out.  Getting this right would ensure staff could understand the device and be comfortable using it within their classroom and we didn't want these devices to be just another 'gadget' relegated to the cupboard.  We had a diverse group of people, some who had their own Apple touch devices (iPad/ iPod/ iPhone), some who had used some sort of apple touch device (but didn't have one of their own) and some who had never touched an Apple touch device.  The iPads were ordered (one per teacher), with the idea that teachers would get personally comfortable with the device before introducing it as a classroom tool ~ we really needed to 'sell' it to the staff.

With the iPads ordered, the actual deployment would be carefully planned.  Proper planning would ensure teachers understood the device and therefore be more confident users.  I knew among the group of teachers who had not used an Apple touch device before, there were skeptics.  How could we make this deployment as simple as possible for everyone involved?  We decided to break the staff into 3 self-selected groups.  The HOT group were those who owned their own devices.  The MEDIUM group were the staff who had used an apple touch device before, but didn't feel they were advanced and the MILD group who were the beginners.  For this group (& anyone else who wanted a copy), I made up a step-by-step guide (using Jing) that included the set-up process, parts of the iPad, installing an app, joining a wi-fi network and tips & tricks.  We really wanted the staff to set-up their own iPads so when more come, they can be set-up and not reliant on someone else.  This also meant staff knew some of the in's and out's their iPads, for trouble-shooting, staff would be better equipped to deal with problems.

The roll-out went well. Staff were happy ~ yay!  Next came the support.  We held staff meetings where staff were encouraged to share useful apps (using Apple TV).  I also set-up a space on the staff wiki to find useful apps.  Staff were also encouraged to add to this collection.  A month down the track we also sent out an anonymous survey asking questions relating to the iPads.  The response was great ~ teachers were ready and wanting more devices with most teachers using it within their classroom programme to varying degrees.


Up-sizing to a combo - Do you want fries with that?
There are so many accessories that can be added to enhance the features of the iPad.  We have already purchased some Apple TV's, so sharing what is on an iPad is easier.

iPad Covers/ Frames have also been investigated.
After a lot of research (talking to teachers at other schools, blogs, twitter, general internet searches), we found two to look at. 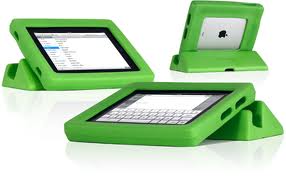 First was the Big Grips iPad Frame. This product is advertised as 'The iPad case made for Kids'.  It was big and certainly provided excellent protection should the iPad be dropped.  After two weeks of use these were the observations (both staff and students)
Positives:
- Looked fun, bright colours
- Protected the iPad and even bounced (impromptu tested by 6 year old accidental drop)
- Could come with a stand that made it easy to prop up (either landscape or portrait)
Negatives:
- The frame is quite big.  They have made holes to get to buttons such as the volume.  It is actually quite difficult to get your finger down to the button (big fingers ~ forget it, tiny finger ~ too short)
- Does wrapping an iPad in foam and being okay to drop the message we want to teach our kids when using these expensive devices?
- Charging the iPad while in it's case proved to be quite difficult as accessing the charging pins was a challenge.
- When filming, my students who used this cover had a pink arch in one corner from where the cover had moved.
- The cover is quite big, making the overall iPad large and bulky (not good for storage of multiple iPads)
- iPad cover is expensive

I looked into other options and found a a silicone product which claimed to be anti-shock. 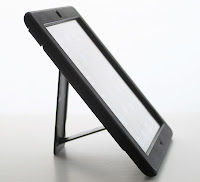 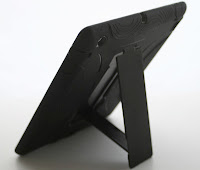 Educase iPad Covers: These were the observations by both staff and students:
Positives:
- The iPad is encased in a hard plastic frame, then wrapped in a heavy duty silicone providing enough protection against dropping (impromptu drop by teacher ~ whoops!)
- The iPad case didn't obstruct any of the iPad features ~ camera was framed, speakers were not muffled by the frame, ports were easily accessible.
- It has a stand enabling the iPad to be stood up, if needed.
- Cheaper than any else like it currently on the market.
- Students enjoyed using this.
- Cover is slim and does not make the iPad too big.

Next Steps
1. To introduce more devices!
2. Find suitable covers/ frames for iPad
3. Continue with staff development and sharing of successes.